the tonal ligand is musical research into cellular communication. We are musicians exploring new frontiers in biology.

hugo bootstrapious template by kishan b

In 2017 our Caltech colleagues identified multiplex molecular communications between cells. They found that the same signals may cause different responses depending on the cell’s type. This research suggests new classes of biotherapies that send discordant signals to cancerous cells without affecting healthy cells nearby.

A single cell can perform different computations depending on which combinations of receptors and ligands are present by harnessing promiscuous receptor-ligand interactions in the BMP pathway.

The bone morphogenetic protein (BMP) signaling pathway comprises multiple ligands and receptors that interact promiscuously with one another and typically appear in combinations. This feature is often explained in terms of redundancy and regulatory flexibility, but it has remained unclear what signal-processing capabilities it provides. Here, we show that the BMP pathway processes multi-ligand inputs using a specific repertoire of computations, including ratiometric sensing, balance detection, and imbalance detection. These computations operate on the relative levels of different ligands and can arise directly from competitive receptor-ligand interactions. Furthermore, cells can select different computations to perform on the same ligand combination through the expression of alternative sets of receptor variants. These results provide a direct signal-processing role for promiscuous receptor-ligand interactions and establish operational principles for quantitatively controlling cells with BMP ligands. Similar principles could apply to other promiscuous signaling pathways.

Many intercellular signaling pathways, such as bone morphogenetic protein (BMP), Wnt, Notch, and JAK-STAT, exhibit a curious feature. Rather than using a single ligand and receptor, these systems comprise multiple ligand and receptor variants that interact promiscuously with one another to combinatorially generate a broad set of distinct signaling complexes. These complexes activate the same intracellular targets and therefore appear to operate redundantly. Previous work has suggested that the use of redundant ligands and receptors offers regulatory flexibility (Llimargas and Lawrence, 2001) or provides robustness to genetic variation (Dudley and Robertson, 1997; Edson et al., 2010). However, it is also possible that this apparent redundancy provides specific signal-processing capabilities (Mueller and Nickel, 2012; Murray, 2007; Schmierer and Hill, 2007; Wodarz and Nusse, 1998). The BMP pathway is an ideal example of promiscuous receptor-ligand architecture. 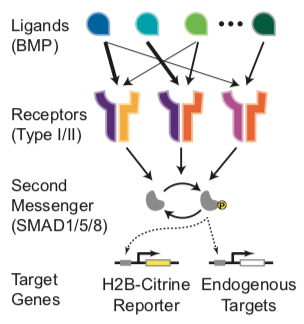 The ability to form many competing complexes with distinct affinity and activity preferences could, in principle, allow the system to perform complex signal processing. However, we lack a general quantitative framework to understand how the BMP pathway perceives combinations of ligands, how such combinatorial perception emerges from underlying molecular interactions, and whether and how distinct cell types respond differently to the same ligand combinations.

Here, combining theoretical and experimental approaches, we show that the BMP pathway perceives ligand combinations through a specific family of multi-dimensional response profiles. These profiles allow the pathway to perceive relative, in addition to absolute, levels of multiple ligands. Mathematical modeling further reveals that these response profiles can arise from the interplay between receptor-ligand binding affinities and the quantitative activity of each complex. The former determine what complexes form, while the latter determines how the activities of those complexes combine to establish overall pathway activity. Critically, we find that the response profiles differ qualitatively and quantitatively depending on the expression levels of the different receptor variants. As a result, different cell types, with distinct receptor expression profiles, can respond to distinct features in the multidimensional space of ligand concentrations. Together, these results establish a general framework for analyzing the BMP signaling pathway and reveal a more general design principle for biological signaling systems containing promiscuous receptor-ligand interactions.

It is useful to consider two multi-dimensional spaces to analyze the way in which the BMP pathway uses multiple receptor variants to integrate signals from multiple dimeric ligand species. Cellular environments, specified by the concentrations of each of the dimeric ligand species, can be represented as points in a multi-dimensional ‘‘ligand space.’’ 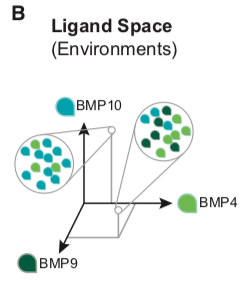 Similarly, individual cell types typically co-express multiple type I and type II receptors (Cheifetz, 1999) and can, therefore, be represented as points in a 7-dimensional ‘‘receptor space’’ specified by the individual expression levels of each receptor. 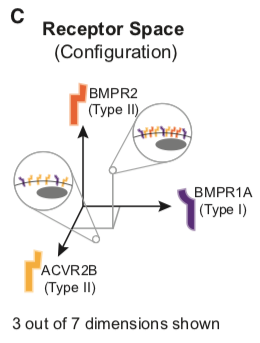 Not every point in ligand or receptor space may be realized biologically, and other secreted and intracellular factors further modulate BMP signaling in specific contexts (Balemans and Van Hul, 2002; Zakin and De Robertis, 2010). Nevertheless, understanding signal processing by the BMP pathway requires determining how multiple ligands combine, or integrate, to control the pathway activity in a cell with a given receptor configuration (Figure 1D) and whether distinct cells, expressing specific combinations of receptors, can integrate the same ligands in qualitatively different ways. 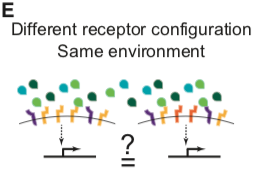 To address these questions experimentally, we set out to measure the dependence of BMP pathway activity on individual ligands and ligand combinations. Ligand monomers form covalent homodimers and heterodimers with distinct activities (Israel et al., 1996; Neugebauer et al., 2015; Valera et al., 2010). Here, we focused on mixtures of distinct homodimeric ligands, which have been shown to produce non-additive responses in some systems (Ying et al., 2000, 2001; Ying and Zhao, 2001; Ac ̧il et al., 2014). Mixtures of heterodimeric ligands could be analyzed similarly.

To quantitatively measure BMP pathway activity, we constructed a reporter cell line by stably integrating a histone 2B (H2B)-Citrine fluorescent reporter driven by a BMP response element (BRE) specific for SMAD1/5/8 (Korchynskyi and ten Dijke, 2002) into the NAMRU mouse mammary gland (NMuMG) epithelial cell line, in which the BMP pathway can be activated without inducing differentiation (Piek et al., 1999). Reporter expression correlated with phosphorylation of SMAD1/5/8 and with endogenous BMP target gene expression (Figures S1A–S1C) and exhibited a unimodal distribution for each ligand concentration. 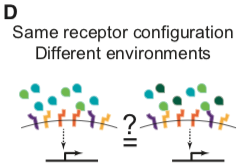 After an elevated transient response to BMP addition, pSMAD levels reached a steady state within 90 min (Figure S1E). The steady-state behavior was also reflected in reporter fluorescence, which accumulated at an approximately constant rate over time for up to 48 hours.